Posted on August 7, 2014 by crankyspanker

I just have to post this any way. I was a huge fan of Karen Gillian ever since she first appeared on Dr Who as a kiss o gram police officer. 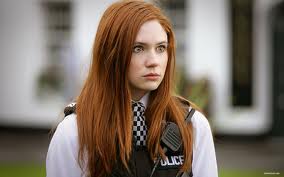 I have to admit the tiny skirt she wore did not influence me at all. Well maybe just a little. Then she shaved her head to be in Guardians of the Galaxy. I can not imagine cutting off all that lovely red hair.

She was cast as Nebula and did a fine job, will probably be back for the sequel. After I had seen her in GOTG I just had to check out what she did in between. I found 2 films Occulos a Gothic type horror tale and Not Another Happy Ending. a Rom-Com. I just happened to catch her on Craig Ferguson and she was saying that she was nude in that movie.

The scene is short but there she is trying to complete her novel, sitting at her word processor, dressed in only a baseball cap. The other Woman in the scene actually says that she would not do a nude scene unless it was vital to the story. Most of the time she is covered up but she runs away from the camera and Karen does naked really well. She claimed that by the end of the day she actually forgot she was naked. You can see her here

This entry was posted in Stuff I Like. Bookmark the permalink.