The Way to Reno

Posted on February 15, 2012 by crankyspanker

I was hanging out one evening with one of my oldest friends; this was many years ago by the way. We were at the beginning of a long holiday weekend and wanted to do something special. It was time for a road trip and we decided to go to Reno. It was about 9 ½ hours by car and nearby was Sparks, Nevada one of the few places where prostitution is legal for adults over 18 years old. The place that we felt we had to see at least once was the infamous Mustang Ranch. Once we got to Reno we got a motel room and rested up for our evening.

We got directions from the desk clerk and went to The Mustang Ranch. I had read about the scene and what I had read did not justify the reality. We went into the ranch and there were a number of women just relaxing around the place. If my memory serves me about a dozen provocatively dressed women lined up from which we were to choose our companion. These were attractive women and I was hard pressed to select just one.

After I picked out an attractive blonde she took me to her room. All negotiations are conducted in private. We talked a while about what I wanted and I thought that I would like to spend a couple of hours with her. Driving all that way I did not want to be rushed and take my time.

Soon were we both naked and she washed me gently and check me out for problems. We fooled around a while and took a short break. During this interlude I felt relaxed enough to ask her if it was possible for me to spank her. Being a pro she took my request in stride and told me that was not what she was into. She then grabbed my ass, one cheek in each hand a while she was manipulating my butt told me that she could ask a friend to join us and they both would spank me silly. It felt great and if I had brought more money I probably would have asked her to let me meet her friend.

Since I was not prepared financially we finished our “date” and while I was cleaning up and getting dressed things got strange. She started acting nasty and I did not know what was happening. I did tell her that this was my first time and until recently I was unaware just what I had done wrong. Even though we had negotiated the price for her services I think that she was expecting a tip. If she had just told me that was customary I could have done what she wanted instead of having an argument about what we had just done. On the other hand arguing after sex may just be the complete girlfriend experience. My friend on the other hand was waiting in the bar nursing a beer, I think he was finished in 15 minutes. OOPS!

I posted NU-WEST comics this Sunday and somehow missed the cover for Anne. For your viewing pleasure. 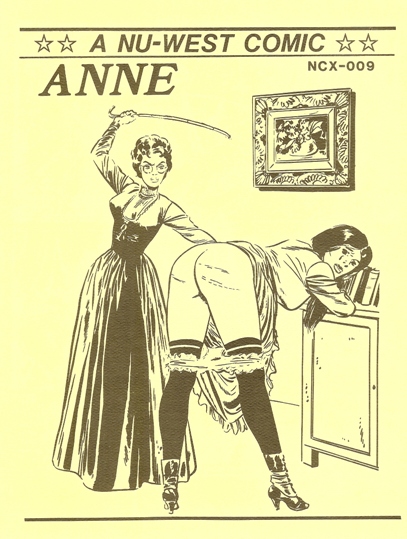 2 Responses to The Way to Reno