Boy will be Boys

Posted on February 15, 2011 by crankyspanker
Boys are vile disgusting vile creatures. Some mellow with age, some do not. Ladies you probably have recognized at least every now and then the boy that your man was. I have memories all the way back to my early childhood. I don’t remember any seriously traumatic event that may have distorted my personality. When my mom was ill I had to live with my aunt for a while. I remember she used to give me baths in her kitchen sink. I was no more than eleven at the time.
I have a nephew, when he was a toddler he would tend to wander from us, usually in restaurants. Woe to any waitress, especially if she was well endowed, that picked up this cute little guy. His little hands would invariably grab for breasts or dig into cleavage. The reactions I witnessed were incredible, laughing or blushing while grabbing those wandering little hands. He would have lost his little mind at Hooters. I have not seen him recently since he is now an adult, but I would bet good money that he is a breast man. 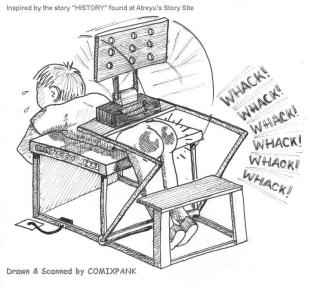 My earliest spanking fantasies were about mechanized punishment. From simply being tied to a swing and swatted on the highest part of the arc, to more elaborate constructions. I would lie in bed and imagine all this, kids my age bound in position on conveyer or turntables, brought into position, and paddled one by one. Now the only things I have seen lately on you tube are a few cartoons. Tom and Jerry, Popeye and the practical pig from Walt Disney, maybe that was all it took to fuel my childish dreams.

I was forced to associate with a group of boys and when they were unsupervised got up to all kinds of weird shit. Most often penalties dished out over lost games. I remember one unfortunate fellow squirming on the end of a broom handle lubricated with peanut butter. Most often the penalties were punches or slapping bare skin until pink. These activities may have fed into my fantasies; I personally had a preferred body part to be slapped pink. What type of association would allow these kinds of activities, foster care or perhaps juvenile hall, no it was called summer camp.
The very first thing I saw on television that really left an impression. I can still remember being drawn to the images and I believe the clip is the same one.

I am not qualified to talk about girls, don’t get the wrong idea, most of my association with young girls was as mom’s boyfriend. I have had more success relating to girls as an uncle, as long as we did not live in the same house. I still can not tell you much about them, but boys have a natural cruelty. I have to say Lord of the Flies could have been a documentary.

We are all the grand sum of our genes and the sum of all the experiences of our lives. I was just watching nine, the director is ruminating about being a man in a body of fifty with a mind of a ten year old. Read my mind.